Sport transcended itself in 2011 for this small island country. It became more than a form of entertainment, it became hope, transubstantiated in Katie Taylor’s boxing glove, Richard Dunne’s boots, and Sean O’Brien’s hands as we watched him steamroll yet another unfortunate opponent.

Did Northampton throw it away? Leinster sure didn’t.

Barrack Obama came to Ireland at the end of May, and he told us something most of us needed to hear. “Is féidir linn”, or for non gaelgoirs, “Yes We Can”. Of course, Leinster already knew that. It must have been their mantra when, three days before the American President touched down on Irish soil, they found themselves 16 points down to Northampton in the Heineken Cup final in Cardiff. In the second half, inspired by Jonathon Sexton, the Blues scored 27 unanswered points to win their second Heineken Cup final, and join the pantheon of Heineken Cup legends including Munster.
The men in red did not have a great start to the year, crashing out of the Heineken Cup at the pool stages for the first time in 13 years. But the mantra inscribed on the collar of Munster jerseys is not there on a whim. “To the brave and the faithful, nothing is impossible”. Written off before the new Heineken Cup even got under way, they sit top of their pool heading into the new year, with four wins and no defeats to their name. They’ve left it late in some games, but when Ronan O’Gara is on the pitch, that’s not even an issue.
The national team’s year went from the most inauspicious of starts – with a disappointing Six Nations and some abysmal World Cup warm-up games – to the elation of beating Australia and the subsequent bubble being burst by Wales in the quarter-finals. Ireland may never have a better chance of reaching a Rugby World Cup final, but their journey to the last eight was enough to give the Irish people at home and abroad a lift. There’s a new generation of Irish diaspora growing across the world since the country went belly up, and it seems that the majority of them were in New Zealand to cheer on O’Driscoll et al. Handmade signs like “Ma, send over me dole money!” brightened up the early hours of autumn Irish mornings as much as the Irish team themselves did. This year also saw the retirement of John Hayes.  There’s not much that hasn’t been said about the man, except maybe that he’s diminutive in stature and lacks modesty. In all seriousness however, the Cappamore man will be remembered in high regard by rugby fans across the country for his often unsung work in the red and green of Munster and Ireland respectively 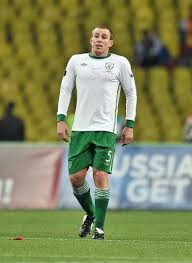 The Irish football team weren’t to be outdone by the rugby team this year. As the Irish nation came down from the collective high we experienced watching their rugby counterparts, Trappatoni’s men decided they couldn’t allow us to feel low for too long. Queue qualifiying for a major tournament for the first time in 10 years, and for the European Championships for the first time in 24. In Moscow in September, Richard Dunne evoked the spirit of Paul McGrath as he single-handedly kept the Russians at bay for 90 minutes. When we drew Estonia in the play-offs, we dared to dream. Yet it wasn’t until the 4-0 win in the away leg did fans begin to plan their trip to next years tournament in Poland. When the draw for the group stages took place in December, we got Spain, Croatia and Italy. What hope we had faded, and the consensus is that Ireland are just happy to be in the tournament. Good. Coming in under the radar and upsetting a few of the big boys is how Ireland’s football teams have always operated.
These were the stories which gained the most column inches in the back pages of newspapers this year, but the sporting odyssey was not confined to rugby and football. In hurling, a Kilkenny drubbing of Tipperary in September’s All Ireland final was enough to shut the mouths of all the nay-sayers who said the Black and Amber were finished. Didn’t they realise that Cats have nine lives? In Gaelic football, there was a small matter of Dublin winning their first senior All-Ireland since 1995. A lot was said after the game against Kerry, but it was the choice of match-winner Stephen Cluxton to say nothing at all that generated much of the debate.
And finally, we come to the individual sportspeople who did much to lift the gloom in Ireland this year. In a year where Tiger Woods made his golfing comeback, Rory McIlroy was the real story. His melt-down at the Masters in Augusta led to many writing him off. When he blew the competition out of the water in the US open two months later, his detractor’s pens ran out of ink.
One woman stands alone as this country’s most consistent performer at the highest level of sport. Katie Taylor this year won two European gold medals to add to her impressive tally. She now has enough gold in reserve to bail out the Irish banks. However, the biggest contribution Taylor could make to this country is to bring home Olympic gold next summer. If her performances this year are anything to go by, that won’t be a problem.
It’s been a busy year in Irish sport. Forget the bad moments, savour the good. When you wake up tomorrow it starts all over again. 2011 was a good year, but 2012 has potential to be great. Happy New Year!
First published on Studenty.me on 31st December 2011.
Images: Brian O’Driscoll (telegraph.co.uk)
Richard Dunne (whoateallthepies.tv)
John Hayes (joe.ie)